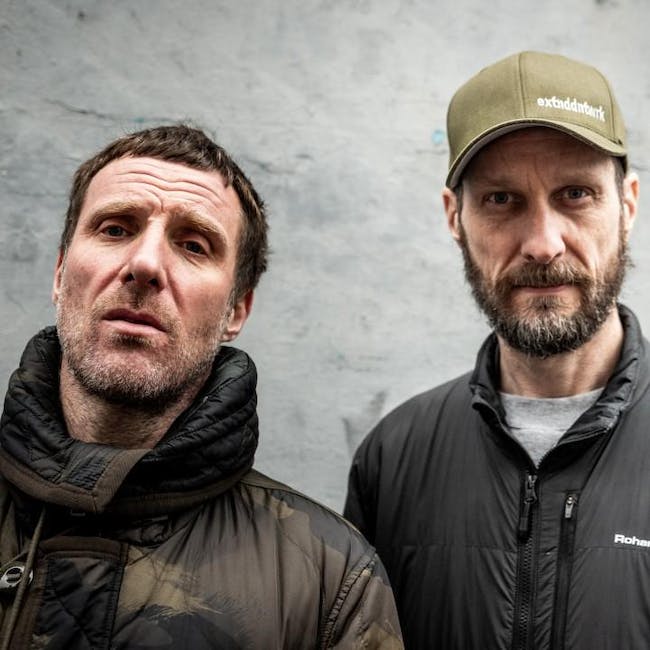 Missed out on tickets? Looking to sell your tickets? Try using our Official Ticket Exchange powered by Lyte to find or return tickets to this sold out show!

As one of the most important, politically charged and thought-provoking bands in music today, Sleaford Mods have been running crass but clever commentary on The People’s discontent, combining the revolutionary fury of punk and hip-hop with the bleakness of austerity-era Britain, their five critically acclaimed albums a pre-Boris crystal ball of impending doom.

On paper it shouldn’t work. Andrew Fearn‘s clever minimalistic beats, post-punk bass, intentionally cheap sounding keyboard riffs and wafts of guitar underpin lyricist Jason Williamson as he rants against stagnation, injustice and pop culture with outrage and scathing humour, capturing the spirit of their time with a blunt eloquence.

On stage there is no pretence. An antithesis to the approach of many electronic artists, Andrew simply presses play on his laptop and steps back to bob his head, drink his beer and watch as the spectacle of Jason moving from angry to hypnotic unfolds.

Stumbling into the music scene in 2013, their breakthrough album ‘Austerity Dogs’ caught the moment. Described by The Quietus as ‘a brutally brilliant slice of working-class culture… soaked in the impossible realities of the everyday’, their surprise success spearheaded a punk renaissance, paving the way for a generation of new artists to follow.

Hands up who thinks Sleaford Mods are the best band in the world. The rest of you are wrong. | Steve Albini

Daffodils for Wordsworth; Boris Johnson, baleful high street pubs and a king-sized bag of Quavers for Williamson. | Loud and Quiet

A poetic blast of classic rage. | The Times

A currently unrivalled feast for the mind. | Mojo

Something potent, original and unique. | The Telegraph

Fierce yet killer funny, dense but never flabby, this is bile with mileage. | The Independent

Biting humour and sharp observations of an uncomfortably recognisable contemporary Britain. | The Observer

Anger is still the foremost energy, but there is a much richer seam of humour than they like to let on. Their set is relentlessly powerful. | The Guardian