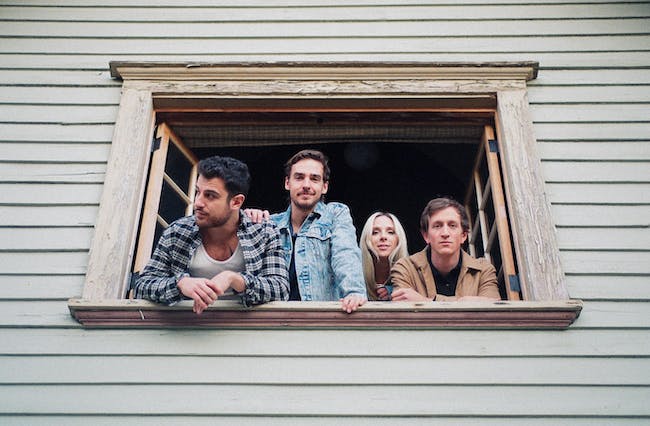 Bands share a whole lot more than just music. They encounter and endure life’s ups, downs, and everything in between as a collective. Along the way, band members grow individually and collectively. Following a year highlighted by 150-plus shows, Wild Rivers transpose personal experiences into relatable anthems woven from strands of folk, indie, rock, pop, country, and beyond. Their 2020 EP, Songs To Break Up To [Nettwerk], brings Wild Rivers— Khalid Yassein [guitar, vocals, keys], Devan Glover [vocals, bass], Andrew Oliver [lead guitar, bass], and Julien La ferrière [ drums]— closer as it also draws listeners in.

“The EP was very personal for me specifically, but building it out with the band was a big step for all of us as friends,” says Khalid. “I spend 95% of my time with my bandmates. We’re a family, so we go through everything together. It’s autobiographical, but the group saw the vision and were empathetic. It went from a singular experience to everyone serving the vision tonally and musically.”

Since the release of their self-titled 2016 debut, Wild Rivers consistently progressed towards this point. As of 2019, their total streams surpassed 100 million and counting. 2018’s Eighty-Eight EP garnered acclaim courtesy of Rolling Stone Country , PopMatters , Earmilk , No Depression , and more. Additionally, the band packed shows across North America and beyond, touring alongside The Paper Kites, Donavan Woods, and Jake Bugg, to name a few.

In the midst of a 2018 road marathon, Khalid faced the dissolution of a long-term relationship, so he poured his heartbreak into the music. “When we began writing, the songs that spoke to us all were centered around the breakup,” he says. “We decided to lean into the theme and make the EP an exploration of the topic, what the different sides of a breakup are, and what the feelings are. These include the good and the bad, the acceptance and the sadness, and the new freedom. We wanted to write a collection of songs covering the spectrum of what you feel going through the end of a relationship.” In order to do so, the group retreated to Nashville, TN in October 2019, working out of Creative Workshop with producer Skylar Wilson (Rayland Baxter; Justin Townes Earle; Joshua Hedley). In the studio, they expanded their sonic palette by further incorporating synths, guitar effects, gang vocals, and choral harmonies.

“In the past, we’ve mainly recorded in Toronto,” says Devan. “We could just hop into the studio whenever. In Nashville, we only had a limited amount of time, so we got locked in and focused on the end goal as a team. We were all staying together, so we were living and breathing the EP the whole time—which was awesome.”

“Our philosophy was to take risks and do something different,” Khalid elaborates. “The whole ethos really helped in making decisions and guiding what we did. If we felt unsure, different, or vulnerable, we always chased that feeling.” By chasing it, Wild Rivers uncovered five undeniable tunes led by the first single “Thinking ‘Bout Love.” Clean guitar and a steady beat reverberate amidst a heartfelt vocal volley between Khalid and Devan. Wistful recollections of an old flame give way to gospel-style harmonies as Devan soulfully sings, “I’m just thinking ‘bout love . ”

“When you’re talking about breaking up or after it’s over, one person will think practically like, ‘We shouldn’t be together on paper. These are all of the reasons this relationship doesn’t make sense’ ,” Khalid goes on. “It’s the rational side of deciding whether or not you want the relationship. Then, there’s my side, which is romantic and naïve. I think, ‘Nothing matters, if we have love and our relationship is good . ’ That’s the only future I’m thinking about. One partner thinks about the logistical hurdles; the other thinks about love. It’s the hopeless romantic versus the cold rational adult.”

On the follow-up “Kinda Feels Alright,” soft strumming and delicate percussion offset candid admissions from Khalid such as, “Last year baby, I was checking in. Now, I’m crashing.” “One night, I went out on the town with my friend, got drunk, had a bunch of laughs, totally relaxed, and just experienced this amazing feeling,” he recalls. “I wasn’t sad about anything. I stopped thinking about the split. When I was walking home, something made me think of my ex, and all of these feelings came back. It turned on a dime. I realized I couldn’t focus on it anymore. I needed to get closure and get back to my life.”

Elsewhere on the EP, drum machines anchor the poignantly playful “Small Talk” as a piano that once belonged to Ray Charles rings out on the bold ballad “Do or Die.” Now, as the band bring Songs To Break Up To on the road, they’ll contribute $1 from every ticket sold to Voices of Our City Choir—a San Diego-based charity working to amend the housing crisis.

By opening up on Songs To Break Up To , Wild Rivers ultimately connect like never before. “We want to validate people’s feelings,” Khalid leaves off. “It’s okay to be sad; it’s okay to be happy. There’s no right way to handle something like heartache, but you can talk about it with your friends. We try to show that.” 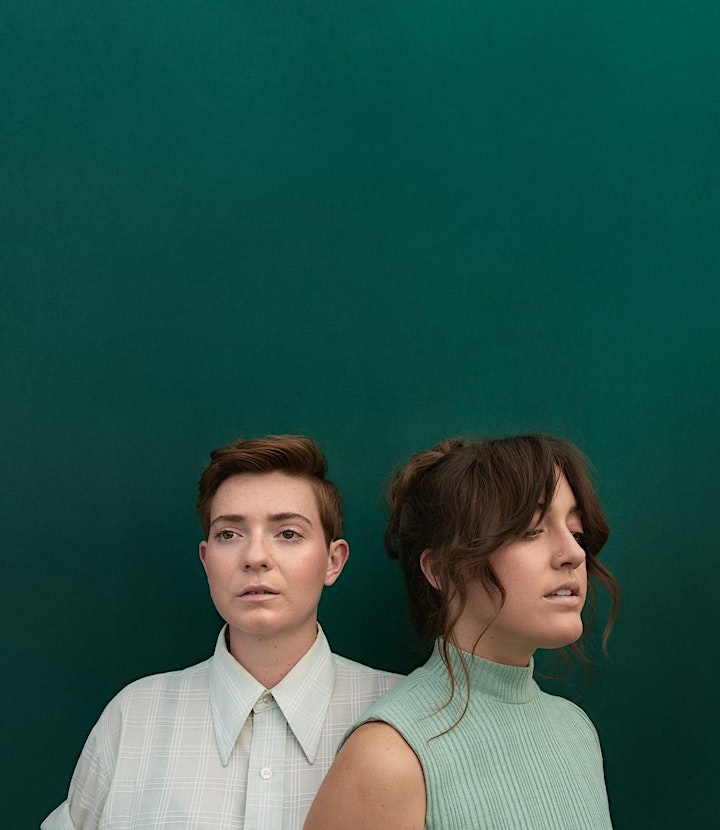 The Harmaleighs have crafted a sophomore record that exists beyond the boundaries of any one genre. At times, the album is loud and tenacious while other moments require a more vulnerable cadence. It’s a new path for the Nashville pair, but it remains rooted in their respective roles. Haley Grant who takes on lead vocals and guitar, often pushes melodies to a more raw and tender edge while Kaylee Jasperson, on bass and backup vocals, guides the heartbeat and overall structure of the music.

Past versions of the band have been sparser, but the group’s newest album calls for a bigger backing. The record, titled She Won’t Make Sense explores new territory in sound and subject matter. The latter deals directly with Haley’s mental health, documenting the many forms depression can take. Opening tune, “Anthem for the Weak” introduces Haley’s anxiety, which she named Susan. It’s a preview of what’s to come, as the record continues like a conversation between the two. “The whole album is me talking to Susan or Susan acting on my behalf,” says Haley. “It’s that dialogue with your inner self and how at times it feels like that inner voice has more control over you than you do.” Musically, the track opens with a Wurlitzer-esque melody that feels bright yet disconcerting. That kind of juxtaposition is found throughout the entire arc of the record, and is something the two intentionally played with: “We definitely wanted the musical aspect of it to make you feel anxious.”

What comes next is the lead single for the record and one of the more powerful tracks on the album. With a pulsing rhythm, “Sorry, I’m Busy” drives into the listener an impending sense that a tipping point is near. The dialogue between Haley and Susan is on full display with lyrics like, “You’re holding my breath, making me red, I want to go to bed, is it night yet? Cancel the plans, they’ll understand, until they don’t understand.” It is a full on rock song, but the more hushed moments before the big drops are a reminder of The Harmaleigh’s dynamic range.

Musically, The Harmaleighs have evolved from their acoustic beginnings, bringing in synths, strings and an overall heavier sound to parallel the emotional weight behind the album. “We use to tour just the two of us, and do more of an acoustic thing,” says Kaylee. “We’re going to lean more towards a full band with a bigger sound.” It’s a natural progression for a band to experiment, but Haley and Kaylee attribute much of their transformation to producer (and Lucius drummer) Dan Molad. Kaylee describes working with Molad as “amazing” and you can hear throughout the record the many ways that both Haley and Kaylee pushed the confines of their instruments and aesthetic. Many of the tracks contain an almost vintage, horror pop quality and this is no better displayed than on “Don’t Panic.” Driven almost entirely by a retro sounding synth, the tracks feels both spacious and distressing with lines like “I’m biting my nails till they bleed, as I’m watching my love sleep comfortably.” It is beautiful and eerily dissonant, and requires more than one listen to fully absorb.

At the heart of the record, is the act of letting go and most poignantly addressed in album closer “I Don’t Know Myself.” It asks a bigger question about whether the darkest parts of ourselves are vital to who we are. Haley describes seeking treatment and the prescriptions that followed. “As I started taking all of this stuff, it was like all of the parts of my personality that I really enjoyed, were no longer there. I didn’t feel creative, I wasn’t dreaming. So when I wrote that last song, it was like do I need this aspect that makes my life so difficult but also so rewarding, or do I let that go and live more peacefully? It’s still an open-ended question.”

It’s one of many questions the duo wants to address with their audience. Known for their stage banter, the two hope they can open up a larger conversation about mental health. “It’s important for us to explain a lot of this, especially with this topic,” Kaylee says. “It’s something that a lot of people deal with but not a lot of people talk about. We want to make sure that when you come to our show, we talk about these things and it’s open. We want everyone to feel like they all belong. This happens and we’re going to shed some light on it.”

She Won’t Make Sense is out August 2 (2019) and signals a real period of growth and evolution for The Harmaleighs. Relationships ended, a bigger sound was discovered and ultimately, the album reaches a more nuanced level of emotional depth. Requiring a remarkable amount of openness from both Haley and Kaylee, the two have started a new conversation with their audience — for all of the unease the album transmits, a sense of resilience shines through, even in the most vulnerable of moments.